After years of being an established and respected act in the experimental-EDM world, Ark Patrol is stepping out of his comfort zone and is set to become a driving force in the booming Alternative Electronic world, on par with the likes of Tame Impala, The Gorillaz, or Toro y Moi. Following the release of his first single of 2020, “Falling From Heaven”, the indie-electronic virtuoso is returning with an even more frenetic single off of his upcoming Geode project, “King” released via LEVEL.

The adventurous composition once again showcases the artist’s impressive – and newly found – range as a vocalist as his distorted voice reverberates alongside the single’s syncopated drum patterns and towering synth lines. “King” is a testament to Ark Patrol’s commitment to pushing the boundaries of his sound and our perceptions of electronic music as a whole. This stereo-filling, constantly moving track, shines as a marvel of what Ark Patrol can do with not only his vocals, but his original production featuring sounds of his own design. When it comes to a DIY artist with an amazingly triumphant backstory, look no further than Ark Patrol.

Listen to King below

RE:UM, a Scandinavian/Irish electronic artist based in London recently started a solo career after creating and performing music since the …

Caught halfway between city noise and rural British landscapes, Jacana People find solace in the suburbs of London during an … 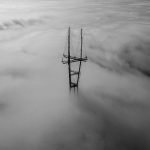