Boogrov creates a unique compilation of authentic folk and electronic music, combining a whole variety of different stye such as ambient, house and soul, fluccuating between them to breath life into his addictive visuals.

Rejecting the boundaries of modernity and past, spoken word and vocals, Boogrov strikes a chord with the flow of customary chants and hypnotic glitches, fitting them just in place and creating the sound that fascinates by its complexity.

Being a well-known Russian sound engineer, game audio director and producer for a long time, Boogrov first appeared on the international music arena in 2013 with his debut album released by Canadian glitch-hop label BugEyed Records hitting the top 10 on Beatport in the first two months. This time round he brings us the new track ‘Воздух’, the second track lifted from his upcoming LP release.

Commenting on the track, the producer offers, “It’s ispired by old tapes for reception rooms, like when you go to your psychologist’s room, and they’re playing a tape for you, where a calm voice asks you to close your eyes and relax, forgetting everything for a few minutes. When I was I child and studied in the cadet corp I was in such rooms every week, but everytime I didn’t want to close my eyes, I wanted keep my eyes wide and dance, because it was my personal relaxation.”

Continuing, “I mixed breakbeat with calm feelings on my modular system with different random sounds on the bass, drums and synths.”

Listen to Воздух below 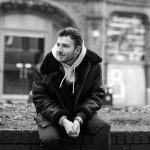