Dotlights is a guitarist turned bedroom producer hailing from the Netherlands. Working from a small home studio in a quiet town near the German border, he combines atmospheric, minimal guitars, downtempo electronica soundscapes and lofi beats.

Following the release of two EPs, as well as multiple contributions to compilations on labels like Chillhop and Memoir, he brings us his latest release Parallels. The 3-track EP link back to the same sessions as 2019’s single First Light, adding synths, arps and an overall more saturated sound to the sonic palette of his earlier releases, expanding on the atmospheric guitars of Qualm (2014) and the more sample and beat-heavy approach of What If They’re Right And You’re Wrong (2016).

Lifted from the new EP is the dreamy composition Let’s Just Not Face It. A delicate sonic world awash in a stretching reverb sits above the shifting rhythms of a grittier percussive offering, the track delivers the quintessential window to the producer’s vision. Deep distorted bass synths glide throughout, contrasted by intricate plucks from the lead guitar to create a captivating listening experience.

Listen to Let’s Just Not Face It below 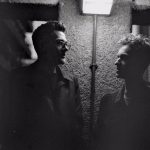